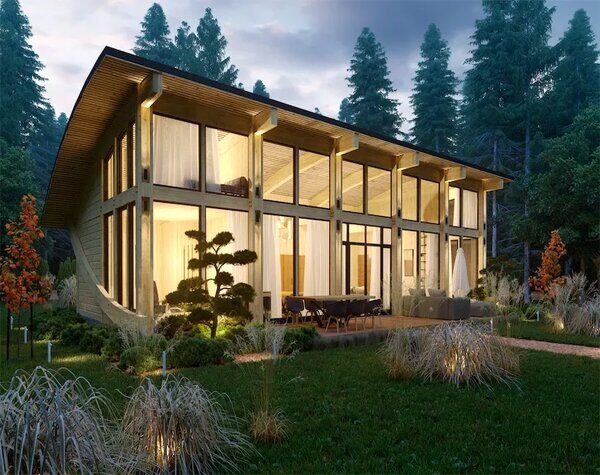 Having a timberhouse is a wonderful way to enjoy a beautiful outdoor space. There are several different designs, colors and styles to choose from. The important thing is to choose a timberhouse that will work for you and your family.

Almost all the houses in Sweden are made of wood. These houses were mainly built in the 1950s and 1970s. The traditional building technique, timber framing, has its roots in many centuries.

The timber houses in Sweden are mainly constructed with a steep pitch gable roof, covered with timber shingles. They also have bituminous felt tiles on the external walls. They are mostly maintained for a long time.

In Sweden, building wooden houses above two storeys was banned in the 1874 Building Code. The 1994 Building Code lifted this ban. This meant that more wooden homes could be built.

Swedish timber houses are built with a timber frame, a framework of posts and beams. This allows for a wide range of facades, open floor plans and good humidity balance. This method of construction is quite different from traditional log houses.

Swedish timber houses were mainly erected in the UK between 1945 and 1951. Almost 4,500 were built. Many of the houses are still in use. They are considered valuable and are maintained for a longer life. The Swedish Federation of Wood and Furniture Industry, known as Tra-och Mobelforetagen – TMF, is responsible for technical development.

Several reference projects can be found in Europe and the USA. The Swedish Timber Frame builds over forty frameworks. It is inspired by the simplicity and robustness of buildings. This method of construction is very affordable.

Traditionally, Denmark has built timber-frame houses. This type of construction is still widely used today. It was initially thought to be a cheaper way to build. However, as times changed, bricks became the most common building material.

There are many types of timber-framed houses in Europe. These include urban ground floors, post and beam houses, and woodhouse structures. Some of the earliest structures constructed in Europe were built in timber. This type of construction is also found in Switzerland and Belgium. In France, it is rare to find fully timber-framed cityscapes.

Timber-work houses are also common in West Central Germany. This type of construction is similar to the Bohlenstanderbau found in Germany. In Germany, the angle braces often form fully extended triangles.

Timber houses are also commonly found in villages. These include houses in the Neobasque style, which resembles old Basque farmsteads. It is a style of architecture that respects the principles of traditional half-timbered buildings.

Some of the most famous Danish buildings are the Sydney Opera House and the Fjordenhus at Vejle harbor. The Roskilde Cathedral is also a UNESCO World Heritage site. The architecture of Denmark has a wide range of styles.

In Sweden, most half-timbered houses were built during the Danish period. In Norway, log building was common during the Middle Ages. However, King Christian IV outlawed log building to prevent future conflagrations.

Whether you are in the market for a new home or just visiting the local area, Germany has a lot to offer. If you are interested in timber houses, there are a number of options to choose from.

A few of the most interesting timber buildings in Germany include the Weissgerbergasse in Rothenburg ob der Tauber and the Handwerkerhof in Miltenberg. These buildings are not only quaint, they have some impressive architectural features.

The most important part of any timber building is the craftsmanship. These buildings are generally constructed from solid oak beams. This is one of the reasons they are durable. The best timber houses are self-built. In the case of Miltenberg, residents were allowed to use free wood from the surrounding area.

In addition to the timber houses, Germany also boasts a number of other quaint buildings. The German Half-Timbered House Road stretches for about 2,000km across several different landscapes. It is a tourist road that links numerous historic cities, markets, festivals and other attractions. It can be quite a drive, though.

The German Timber-Frame Road crosses the country from the Elbe in the north to the Black Forest in the south. This route consists of many carefully restored sites and is a must for any tourist. This road also crosses through the federal states of Lower Saxony, Saxony-Anhalt, Bavaria and Thuringia.

A trip to Germany is a must for anyone interested in timber buildings. The best timber houses are found in Bavaria, although Rothenburg ob der Tauber and Miltenberg are also worthy of a visit.

Throughout the ages, Norwegians have lived in timber houses. Their history in timber construction is as rich as their landscape. From ancient train stations to modern buildings, wood is the building block of Norwegian design.

Timber houses are often simple, yet robust. They provide a warm and welcoming environment. The longevity of these structures depends on the quality of the timber used, as well as the preparation of the tree trunks.

Norwegian architects are rediscovering new uses for wood. In addition to buildings, wood is also used for student housing and rest areas along Norway’s Scenic Routes. Many of these houses feature grass growing on the roofs.

There are several Norwegian open air museums showcasing traditional timber houses and their contemporary counterparts. In fact, the Royal Norwegian Consulate General is holding a seminar in Edinburgh, Scotland on “Houses in Wood: The Modern Norwegian Model” to coincide with an exhibition of the architect’s work.

Norwegian timber construction is a hot topic, and architects are exploring new ways to incorporate it into their work. For example, entrepreneurs are constructing tiny wooden houses on wheels. In addition, Norwegian engineers are discovering new ways to use wood.

Despite its storied status, the colombage pierrote timberhouse was not restricted to the rural hinterlands. The modern day equivalents of the quaint were built in cities and suburbs as far north as Toronto and Ottawa, and as far south as New Orleans and Memphis. Unlike their predecessors, they were not constructed of lumber, but rather of brick, mortar and stone. Despite their modest appearance, they still evoke the feeling of a bygone era. And for good reason.

One of the better examples of the era was the Maison Lamontagne, a joint venture between the philanthropists Basile Cote and Marie-Agnes Lepage. The house was one of the few to be designed by an architect, but the construction drew only a small crowd, despite the hefty price tag. The most impressive part of the structure was its glass dome, which provided a bird’s eye view of the neighbouring tavern. The building was constructed in the year 1750, and was fully restored in 2006. It is not surprising that a storied building of this ilk should have been an important factor in the planning process. The house may have been small, but it did have a snazzy reception hall and a series of cosy bedrooms. Despite the lack of modern amenities, the home did house a collection of interesting art and antiques. The occupants were spoiled for choice. This may have been the genesis of the colombage pierrote phenomenon.

Infills for timber houses can be made of timber, steel, or aluminium. They can also be clad in stone or external material. The choice of infills depends on the design of the building and the end use of the building.

In ancient times, the most common infill was wattle and daub. These were often installed vertically. However, they were also installed horizontally. In modern times, these are also called opus craticum. The Romans also used these methods for stone/mortar construction.

Infills for timber houses can be prefabricated. These can be constructed in a factory, or installed on site. Timbers can be fabricated and fitted in a shop. Foam sheathing can also be nailed to the outside of posts for rigidity.

Infills for timber houses can be either structurally solid or top-hung. In solid form, the walls are typically constructed at one storey. In top-hung construction, the walls are tied to the columns with wall ties.

Infills for timber houses can also be clad with external material such as stone or aluminium. They are lightweight and require less maintenance. They can also be erected with simple lifting equipment.